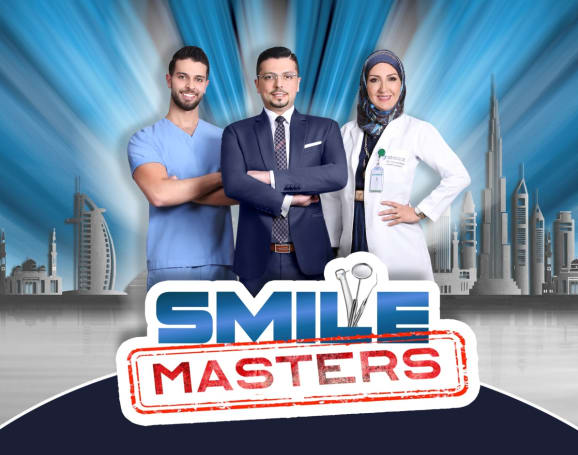 After the long-awaited anticipation of the “Smile Masters Show” announced in May 2017,

it was officially launched on Wednesday the 8th of November 2017, at Emirates Towers under the patronage of H.H. Sheikh Mansoor bin Mohammed bin Rashid Al Maktoum and supported by the Dubai Health Authority which was represented by the presence of H.E. Humaid Al Qutami, Chairman of the Board and Director General of the Dubai Health Authority and joined by an A-list group of invitees including ministers, government official representatives, international medical figures, celebrities, media influencers, bloggers, and different media channels, with a total of 170 million followers on their social media platforms.

The first episode was aired at the launch, live at 8pm to the public and the attendees on Dr. Majd Naji’s YouTube channel which covered a life changing story of 26-year-old Siham who has struggled with her teeth deformation all her life and with Dr. Majd Naji’s concern on convincing his younger brother Dr. Mohammed Naji in London to join him at Liberty Dental Clinic in Dubai to help him out. Dr. Majd Naji along with Liberty Dental Clinic’s team of professionals managed to transform Siham’s life forever with a one month treatment plan that was completed by using the 3N Veneers technology. Indeed, it was an extremely touching story and a very emotional moment when Siham’s new smile was revealed that brought tears to the eyes of the attendees in the ballroom and given the comments on the video most of the online viewers too. Fiercely, the video has striked 1 million views in less than 24 hours, which is an exceptional figure in the Arab world stats.

Smile Masters, is the first of its kind medical reality show in the Middle East. The show portrays Dr. Majd Naji’s personal life with his wife Dr. Deema Basim, and his younger brother Dr. Mohammed Naji, where this trio constantly change people’s lives and smiles through a series of events in Dubai the city of dreams and glamour.

A new episode will be uploaded on a weekly basis on Dr. Majd Naji’s YouTube channel, with a new life changing successful story revolving around the trio and the renowned Liberty Dental Clinic in Dubai.

HUB.movie! The best way to watch any film or tv show online