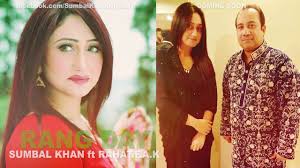 Sumbal Khan’s new track with Rahat Fateh Ali Khan. Sumbal Khan is an Indian Model, Singer, And Film Actress. She belongs to Islam Family. Her Real name is Sumbal khan and  Sumbal is given by her fans. She starting working in the entertainment industry in 2007 and also Sang 15 Pashto Songs. at the beginning & she worked as an actress in dramas and short films.

Sumbal Khan’s father is Iqbal Khan. She has one sister and her name is Kompal Iqbal. She is unmarried. Sumbal Iqbal has acted in some comedy serials too such as “Kis Din Mera Viyah Howay Ga” of Geo TV and “Raju Rocket” of Hum TV. She also won the award of “Best Actress Soap” by Hum Awards in 2013.

Even though she had been offered numerous regional and national films in the past, academics being her priority, she had never taken to doing films. It is now, that Sumbal Khan is finally debuting in a bollywood movie with an well known actor & recently some posted has been released about the Track with Rahat Fateh Ali Khan: https://youtu.be/AGujC3FWnyY

Title Song is yet to released by the Director but the Title of the Movie is “Rang Dey” in which Ayaz Sonu gave the music direction who is also well know Music Producer of Music Industry & Sumbal khan is learning under his Guidance itself & Choreography done by Nigam in the Song & the whole direction is done by Saleem Khan.

Sumbal did one track earlier with well known Music Director of Industry “Sahir Ali Bagga” which got over a million views on YouTube.