Award winning photographer, Chris Fabregas, captures the essence of nature’s beauty and brings the magic of the outdoors into people’s homes and offices. Fabregas is also known for his inspirational canvas prints which have been featured on a billboard in Times Square, magazines, and news publications around the world. Since 2017 Chris has sold more than 4,000 prints to people in 36 counties. Most recently he caught the eye of, two-time NBA World Champion and Olympian Lamar Odom from 2,634 miles away. Odom saw Fabregas’ famous “Never Let Fear Speak Louder Than Your Dreams,” canvas print which features the quote and a lion’s face. “This piece really spoke to my heart,” Odom said, “I look at it daily to help motivate me to achieve success and follow my dreams. It’s amazing to find Chris’ art on social media and now have it in my home, he’s definitely a talented dude!” 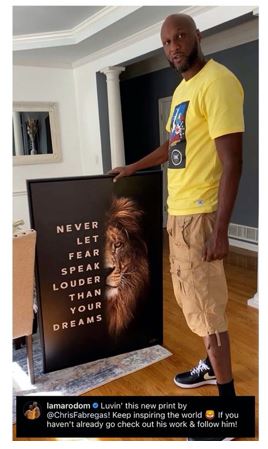 Everyone knows about Odom’s past difficulties as they have been written about profusely. However, recently he has been an advocate for helping people overcome addiction and living a healthy positive lifestyle.

Fabregas recently created his motivational prints during these uncertain times in the world. He said, “Between COVID and politics the world needs a little inspiration.”  He is not new to hardship, his art career started off the back of his mother’s heart failure diagnosis. She would write positive messages for Chris every day when he’d visit her in the hospital. That’s when the idea was born to combine his mother’s positive messages with his art.

Actress Sarah Catherine Hook, star of The Conjuring: The Devil Made Me Do It and Olympian long jumper, Norris Frederick are long-time supporters of Fabregas.

Sarah Catherine Hook recently commented on Instagram saying “I LOVE @ChrisFabregas PHOTOGRAPHY!!!!! He can pack an entire adventure into one photo and make us feel like we’re there.”

His art is featured in the homes of celebrities such as Dancing With The Stars’ James Maslow, LA Dodgers Max Muncy, and USA National soccer star Cristian Roldan.

Fabregas’ vivid and pure images leverage sophisticated digital technology to capture a level of detail that is stunning. They are presented on high quality metal, canvas, and museum grade paper, which makes his appeal that much greater.

Chris has also developed quite a fan base online, amassing an Instagram following of over 21,700 on his official account @chrisfabregas. Where he showcases some of his most inspirational art and photography. A page filled with his artistic vision, framing nature’s beautiful backdrop in each grid.

Chris Fabregas’ inspiring art can be found at chrisfabregasfineartprints.com.