HeadlinePlus Press Release Distribution
MENUMENU
Home Arts & Entertainment press releases Embark on an intergalactic journey with Fair Fight Vol.1 The Animation –...
Facebook
Twitter
Pinterest
WhatsApp
Created by Tyree Pope, Fair Fight Vol.1 The Animation is based on the comic, Fair Fight Vol.1, which is still under production. The story is about three characters, Ultra, Lennox and Human, who try to escape and overthrow their alien oppressors. Tyree created this comic and animation series for black inclusion in media and animations. He is also running an Indiegogo campaign to collect enough funds so that his dream can be transformed into reality. 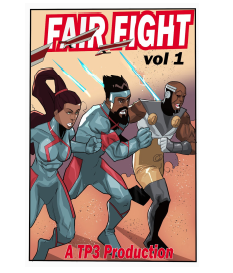 Milwaukee, Wisconsin, USA – Comics are loved by many people all across the globe, they are a great way to relax and enjoy a good plot. Inspired by Anime, Tyree Pope has set out to create some of the best comics and animated series that feature black characters and their intergalactic adventures. The comic, Fair Fight Vol.1 and its animated series, Fair Fight Vol.1 The Animation are the artsy work by Tyree Pope. In his comics and animations, Tyree makes use of the science fiction genre, where three main characters try to run away from cruel aliens. The comics and animations are being created with intense care and dedication, all of which requires financial support, and to seek such support, Tyree has started a campaign on Indiegogo to meet his needs so that he could pursue this art.

Tyree Pope also runs a media company under the title of TP3 Productions that emphasizes video production, podcasts, comic books, animations and films. One of the renowned projects undertaken by TP3 Productions is the interview series ‘Kickin’ it with Tyree’. So far, 50 interviews have been conducted, where the artists from Milwaukeed, NYC and LA surrounding regions showcase their talents and inspire others.

Under the production of TP3 Productions, Tyree Pope has created this comic and animated series. The campaign being run on Indiegogo is a means for Tyree to acquire funds to develop a full-length animation pilot for this story. The objective amount of money to be raised through this campaign is set out to be $12,500. However $4500 are needed just to begin the process. Fair Fight Vol.1 recently won 2 grants, one from IgniteMke and anotherfrom Carvd N Stone. Furthermore, Tyree has a pre-order for Fair Fight Vol.1 starting on 25th March. 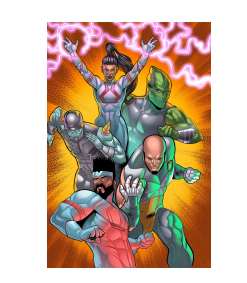 Not many animated series feature black characters, and so, Tyree has created this comic and animation series to involve more black characters in the industry of comics and animations. Tyree wants to create this animation and comic to inspire his nephews and nieces so that they can see themselves in these characters. Moreover, he wants to show his community that they can achieve their dreams and they should pursue whatever they like. They can turn their dreams into reality if they put in the required effort.