The past two years have been a very interesting ride for Lovari. Although 2019 onward has been his most successful career wise (a Billboard charting single; a Top 5 iTunes album; supporting horror film roles; winning “The Match Game” on ABC), he has gone through a plethora of criticism, both professionally and personally. Lovari’s core fanbase (LGBTQI) nearly cancelled him after he publically thanked former US President Donald Trump for passing the Music Modernization Act. The backlash continued when he began performing The National Anthem throughout the country at the height of Colin Kaepernick’s “taking a knee”, as thousands of others followed suit doing the same. Most recently, an ex wrote a scathing public blog with intimate details about Lovari’s personal life, and inappropriate photos of an 18 year old Lovari were released nearly simutaneously. His response on social media to the aforementioned is always the hashtag #SorryNotSorry.

Therefore, it is no surprise that his latest music video “Keep It Movin’” continues his unapologetic attitude and behavior. The three-minute clip features the singer and actor as a news reporter with images of words on video screens presenting opposing viewpoints. Among them are Let’s Get Vaccinated Vs. Just Say No, Defund The Police Vs. Call 911, Black Lives Matter Vs. All Lives Matter, White Privilege Vs. Karen Is A Racist Term, Marriage Vs. Sidechick and more. 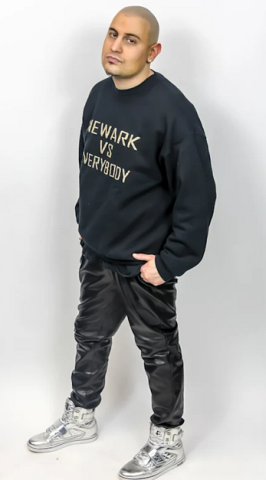 The song originally appeared on Lovari’s album “No Holding Back”, but seemingly due to the content of the lyrics, it has made a resurgence on streaming platforms. With lines that include, “Getting really sick of you. Hypocritic attitude. This trickery going on. Fighting for justice.” It’s easy to see why it has regained traction years later.