MEMPHIS, TN – July 13, 2020 – Much of the recent criticism surrounding the big social media platforms is that they are now longer the platforms for free speech that they once were. These platforms have rapidly changed over recent years, and are influenced by special-interest groups and the investors that back them. As a result, they’re more motivated than ever to control the narrative of the users, and sell their private information for a profit. The privacy concerns and attempts to limit free speech have sent many users looking elsewhere.

One liberty-minded web professional, Wes Upchurch, decided enough was enough and set out to develop a new social media experience built on a foundation of respect for people’s rights. Thus, he created Wabitz.com, a site that values the free speech and and protects the personal data of it’s users.

Freedom is the future of social media. Freedom to connect with others. Freedom from being sold to the highest bidder. Freedom to speak your mind. This is Wabitz.

Wabitz is a new social media platform designed from the start to harness the power of discussion. It sets you free from the dangers that arise when Big Tech controls who can and cannot have a public voice. On Wabitz, you can post what you want without fear of being censored, shadow-banned, or suspended, just because your viewpoint doesn’t fit the politically correct standard that the powers that be expect from you.

Wabitz will never ban an account just because the viewpoint is unpopular. Because, at Wabitz.com, every voice matters. One of the founder’s central beliefs is that people can only come together, and truly understand each other, when every voice is heard. Silencing the minority has never been acceptable, but today that is exactly what the mainstream platforms are trying to do. That’s why people are leaving the tech giants and looking for something different. 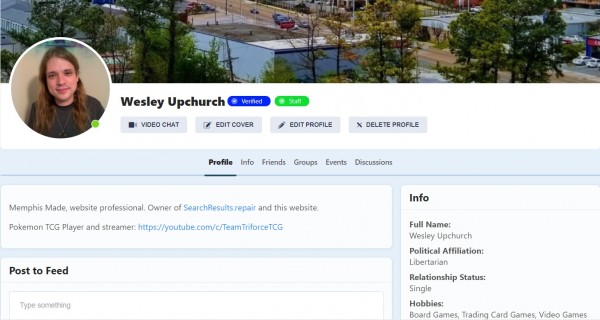 Wabitz is different. It has everything you have come to expect from social media, including profiles, status updates, groups and events. But it is also built to be a place of discussion and debate. No two sides of an issue will ever find their common ground if they aren’t free to hear one another out. But without the fear of being de-platformed, people can communicate boldly and stand for the causes that matter.

When users want to disengage from debate, they can stick to more personal channels. Wabitz allows users to communicate privately with friends and loved ones. Wabitz allows you to communicate privately or spend time sharing your life journey through messages or video chat. And throughout the experience, Wabitz upholds high standards when it comes to user privacy. Personal data is kept confidential and is never sold to third parties. This is the future of social media. Wabitz.com is safe and secure, both technologically and as a platform for expression.

Wabitz.com is solely owned and operated by Wes Upchurch, a social media professional. Wes Upchurch is a lifelong libertarian and defender of the constitution. Visit wabitz.com to signup today.