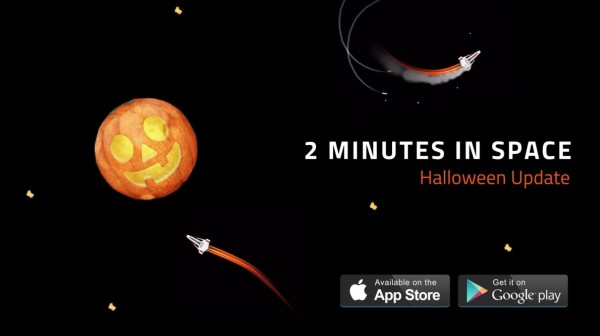 Tenerife, Spain – October 25, 2021 – 2 Minutes in Space, the new free action and survival game created by indie game studio Rarepixels, is offering a limited-time version for the hair-raising Halloween season. From now until October 31st, user experience of the sci-fi mobile game will be amplified by spooky design, wherein the Moon located on one of the space maps will turn into a pumpkin.

“Our designers have created an atmosphere where you feel like you are flying your own spaceship,” said a representative creator from Rarepixels. “We are excited to provide a unique, thrilling Halloween edition to our already electrifying 2 Minutes in Space game.”

The action-oriented energy of 2 Minutes in Space makes each player an astronaut, throwing dangerous objects and challenges their way. Watch out for asteroids as you fly through space and collect gold pieces on the way, which can unlock new ships and defense weapons. This game is addictive, and includes 13 different ships to choose from, and you can fly to locations including Orion Nebula, Asteroid Belts, and Moon or Gravity Fields. There is only one objective after starting the space challenge during 2 Minutes in Space: survive as long as possible. Get lost and find yourself in 2 Minutes in Space’s dangerous universe!

“Our hope in game development is to provide distinctive, special experiences for all players,” continues the studio’s representative. “Now the game’s ambience also encapsulates the holiday spirit to keep our users on their toes!”

Rarepixels is an indie game studio that has published two highly successful mobile games, Planes Control and 2 Minutes in Space. The studio’s idea of developing games was borne out of an experiment launched by the company’s two founders. The company also runs a coworking space on the island of Tenerife, which inspires synergy with game developers and remote workers from other industries. Rarepixels plans to release new games and projects dedicated to gamers and game developers in the future.