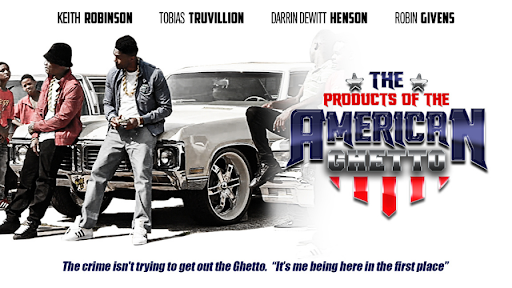 United States – October 12, 2021 – The 9th Inning Media Group and Atlanta Dream Team Productions have released “The Products of the American Ghetto” on streaming platforms such as Amazon Prime and Vimeo. From the well-known director Henderson Maddox and writer and producer Tierre Ford, the film, set during the War on Drugs-era in Atlanta, Georgia, follows a young boy fighting to protect and provide for himself and his mother by selling drugs. Based on true events, the feature-length film is a relevant and timely drama exploring the disparities that exist for Black Americans and the reality of the War on Drugs.

“The Products of the American Ghetto” was released in 2018 to run internationally, and stars Darrin Dewitt Henson as Easy. Darrin Dewitt Henson who formerly appeared in “Soul Food”, “The Inheritance”, and the television series “The Family Business.” The film also includes notable performances from actors such as Robin Givens, Tobias Truvillion, and Keith D. Robinson.  Viewers who watched films such as “Boyz In The Hood”, “Streets”, “Menace II Society”, and “Straight Outta Compton” can see a striking resemblance to the stark realities showcased in “Products of the American Ghetto”.

Tierre Ford, writer and producer of the film, touts that “The Products of the American Ghetto” amplifies the conversation about systemic racism in the United States and the truth about life in the Atlanta ghetto. “Every day, there are people stuck without the tools to get out of the ghetto.  Black people were historically sold like products in the United States, and the resulting disadvantages and advantages of life as a Black person in America can be seen in this film,” said Mr. Ford.

Starting with 8-year-old Brian growing up in Techwood urban housing in Atlanta during the 1980s, “The Products of the American Ghetto” observes the boy growing up and witnessing the traumas his mother and sister go through and follows him through his journey to protect them. During one of the most historic moments of Atlanta’s history during the Nixon-Administration’s War on Drugs, the film recognizes the underpinnings of poverty, drug trading, and gang dynamics in the United States.

“Before the Miami gangs and drugs started flooding in, it was the small gangs in Atlanta. Drugs had not really taken over yet. The ghetto was more like family, everyone knew each other. But then, you had this whole different city of a completely different type of people, gangs from Miami, coming into Atlanta to take the whole game over,” says Barrett Dungy, CEO of Urban Home Entertainment, distributor of the film. “They did not care who they took out in the process. They had a message in mind, and they were there to deliver it.”

“The Products of the American Ghetto” is rated 18+, and runs for two hours and seven minutes. Access the film on Amazon Prime here, and Vimeo here. For more information, visit the IMDb here and Urban Home Entertainment’s website here.