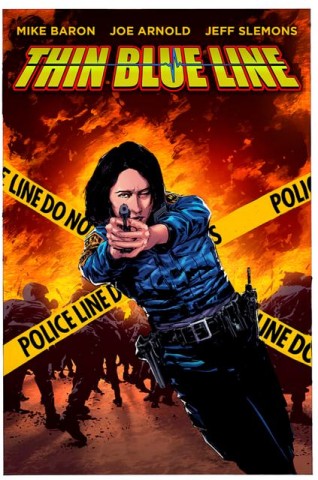 Novelist Mike Baron made a name for himself in the comics industry with a legendary five year run on Marvel Comics’ first ongoing series for The Punisher, a popular anti-hero that recently got his own Netflix series. Now the award-winning writer is set to stir up controversy with his next comic Thin Blue Line. With superheroes popular in both comics and film, this comic book is unique in that the protagonist is a single mother who works full-time as a cop. Baron was inspired to write the story to show his support for law enforcement.

“I’ve always ripped stories from the headlines, as readers of Punisher and Nexus can attest,” said Baron. “The country’s slide into anarchy is the stuff of drama, and one reason cop, lawyer, and doctor related shows are so popular.” Baron adds “most cops are civic-minded individuals who want to serve the public. Narratives pushed by the ‘defund the police’ crowd are inaccurate.”

The comics industry has drastically evolved in recent years, with the likes of Mike Baron making a mark with his own creations such as Nexus, The Badger and last year’s hilarious Florida Man. Over the course of his career, the Eisner-winning writer of comics and novels has worked at Marvel, DC Comics, Valiant, and Dark Horse Comics, writing many of the biggest titles in the industry including The Flash, Green Lantern, Star Wars, and dozens more superhero and sci-fi tales. With Thin Blue Line, Baron is bringing atwist to the traditional superhero plot with a gritty, realistic, and entertaining tale featuring a diverse cast of realistic characters. 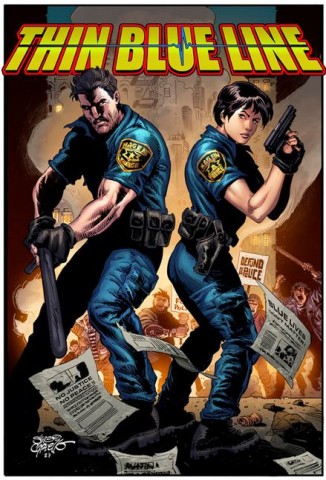 Mike recruited artist Joe Arnold, a police officer, who personifies the experience and accurately depicts the plight of average cops. He also brought in inker Jeff Slemons, who is an outstanding artist as well.

“I’ve known Joe since long before he became a cop. He was always drawing and a regular at our local monthly comic meetings, along with many other industry pros like Gabe Eltaeb. Joe was a natural fit for the project and brought authenticity to it.”

Once the artwork was complete, Baron and his team pitched the tale to numerous publishers, but none were willing to take a chance after learning it depicted the “Defund the Police” movement in a bad light. So Mike and his team decided to launch a crowdfunding campaign in order to raise the finances to color and letter the book and then distribute it themselves.

“We had enormous success self-distributing my Florida Man graphic novel earlier this year” Baron said, referring to a humor comicbook based on his series of novels. “That comic was ‘neither fish nor fowl’, although there are fish and fowl in it – and my readers loved it!”

Thin Blue Line illustrates the plight of cops in a thrilling way, and a portion of the proceeds will go to various police assistance projects. For more info visit www.thinbluelinecomics.com

The People Behind Rolliways Talk About Their Exciting Puzzle

The First Ever Super-Puzzle Is Set To Be Launched – Rolliways